Today, Great Britain’s The Guardian (whose readers think they ought to run the country according to Yes, Prime Minister!) highlighted the importance of cellphones for Africa’s future economic growth. Cellphones used to circulate information about prices, it allows producers to coordinate their activities more efficiently and they also permit mobile banking. In short, they reduce transaction costs and allow firms to expand their boundaries, to specialize even more and outsource some activities to other firms.

However, I am quite surprised that all the attention has gone to Africa with regards to cellphone. True, there is an ongoing “cellphone revolution” in Africa, but Guatemala is the country to look at. In the 1990s, Guatemala liberalized its telecommunications industry so as to reduce to a near zero the barriers set by the government for entry in the industry. There are now hundreds of telephone providers in Guatemala and there is an explosion in cellphone numbers.

Let us compare Guatemala with two affluent countries of Africa which are often hailed as “success stories” (Bostwana and Mauritius) and the often-mentionned country of Kenya (UN DATA). For good measure, let us also South Africa and Uganda which is mentionned in the Guardian’s article. As we can see below, Guatemala is by far the country with the most cellphones (pre-paid and post-paid) per 100 inhabitants, in fact it seems that many may in fact have two cellphones.

This is strong testimony to the benefits of liberalization of telecomms in Guatemala and that country should be the one to look at for the fullest extent of cellphones in economic growth. 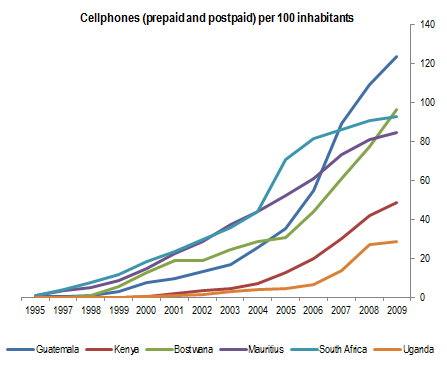