The importance of Quebec for the British empire is often underlined. However, since its main waterway – the Saint-Lawrence River – is the gate for the inner parts of Canada coming from the east, it was crucial to conserve the colony and prevent its rebellion or defection to the Americans. Nevertheless, the case of Quebec within the British Empire has been vastly understudied even if it could yield powerful explanations as to how England designed policies and institutions to minimize the risks of defection and rebellion.

In fact, French Canadians were quite loyal. They formed volunteer batallions to fight the rebels of Pontiac, they assisted the British in the first American invasion and formed the bulk of the army that defeated the second American Invasion at Chateauguay. Why would they not defect? Did the institutional choices made by London for the newly conquered colony had any effect?

And Institutional reforms they did enact! They stabilized the currency market and stopped the practice of “playing card money” which stopped the galloping inflation, they abolished monopolies on fur trading, they partially reformed the property rights system, reduced government expenditures and they opened up the colony to trade with the thirteen colonies.

Did these institutional reforms generate conditions that were favourable to elicit trust from the French Canadians (growth or rent seeking for elite merchants)? . Those who discuss this issue often make use – openly – of a marxist framework of analysis. For those who don’t, the vast majority does make use of insights from New Institutional Economics and the role of institutions. The main exception are Robert Armstong and Marcel Trudel.

It seems that there is something to be said there, but why has no one jumped on it? It isn’t for lack of data! In fact, the table below gives a good image of the available data. None of that data actually spans over a period that overlap the French and British regimes (at the exception of those with an asterix next to the time period) . The original sources (primary ones) are easily accessible and could be collected and amalgated together to obtain a wide portrait of the economy of the colony at the time of the Conquest. 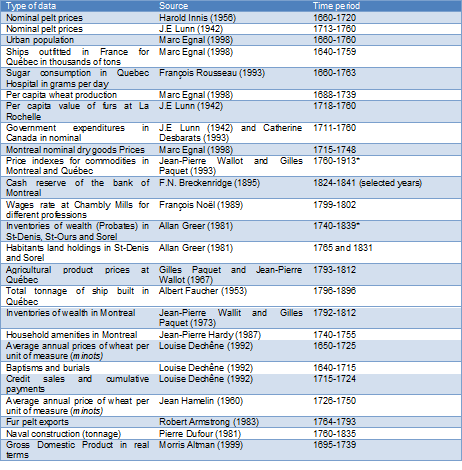 If one wonders how the British Empiresustainedits conquests, it is hard to avoid the question of how they implanted new institutions in conquered societies and under which constraints they did so. The case of Quebec is probably the most interesting to answer this question of how British goverments made choices with regards to the transplantation of institutions in order to keep the sun shining forever on their realm.