If I had to point to one problem that economists get frustrated with when they jump in the field of economic history, I would point to the idea of the “peasant mentality”. In many history books either for backwater societies or pre-modern economies, generations of historians have labelled peasants as “incapable” of showing economic rationality. Hence, the use of economic theories to explain individual behaviour is – although increasingly used – a novelty in most historiographies. Many economic historians like Sheilagh Ogilvie, Tracy Dennison, Winifred Rothenberg, Robert Gallman and Philip Hoffman have used the approach of stating the capacity of peasants to maximize utility albeit imperfectly in the case of central Europe, Russia, America and France.

Since I started working on Quebec’s economic history (and by extension on North American economic history as a whole), I had to deal with the same claim of peasant mentality. In the case of Quebec in the early 19th century, which is one of the topics I treat in my doctoral work, it is claimed that peasants were somewhat unable to shift from wheat to other crops after the first decades of the 1800s. Although there was a partial shift to oats, it is claimed that peasants were incapable of responding to relative prices, which led to a deterioration in living standards.

Using data collected by Fernand Ouellet (the main proponent of the “peasant mentality” approach in Quebec) for the prices of agricultural commodities, I decided to observe how peasants responded to relative price changes and how this affected the values of these commodities exports. Since I don’t want to divulge all my work in a blog post, I only took the exports of flour and wheat from Quebec and attributed to them the prices given by Ouellet. Then I looked at how these exports responded to relative prices changes to oats. Normally, economic theory would dictate that all things being equal, a decline in the relative value of wheat to other products (namely oats) would lead to a reduction in the supply of wheat since factors of production would end up being reallocated to other forms of output (again, oats as historians point out happened). Do the observations match the theory? Between 1800 and 1822, with the exception of the anomalous three years of the Anglo-American War (1812-1815), as the relative price of wheat falls so does the real value of exports of wheat and flour per capita (wheat by itself falls also, but in a more “see-sawed” way). 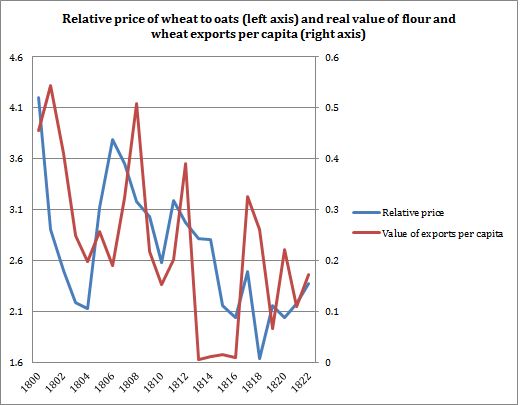 Between 1825 and 1839 (I don’t have data for 1823 and 1824 regarding prices of oats, but I could extrapolate from other series, but that is for another post), the relative price of wheat increases and so does the real value of  exports of wheat and flour (as well as wheat alone).

This indicates that peasants, in spite of being limited by poor communication and dual languages in Quebec, did respond to price changes. Peasants in Quebec were not “idiots”. If there was a decline in living standards from 1800 to 1840 (something I intend to dispute in a future post), then it was not because peasants were “idiots” – a study of institutions and how they shaped incentives is even more warranted.