Still in line with my articles regarding market integration in Canada prior to confederation, I am posting what prices in Ontario looked like before 1845 and between the different regions. It seems that prices were moving together and closely together.

But more interestingly is the integration between the Lower Canadian district of Montreal and Central Ontario which is a trend that is strenghtening in the 1820s up to the late 1850s. The graph below illustrates the coefficient of variation between the different markets, the higher (lower) the coefficient is, the more (less) disintegrated the pair of markets are. This is an important trend in the early development of the Canadian economy which have not yet been illustrated empirically. It means that markets are operating closer to what we could qualify as the efficient market hypothesis. Since arbitrage opportunities could be exploited, specialization and a lesser reliance on agriculture would likely have become possible during that period. 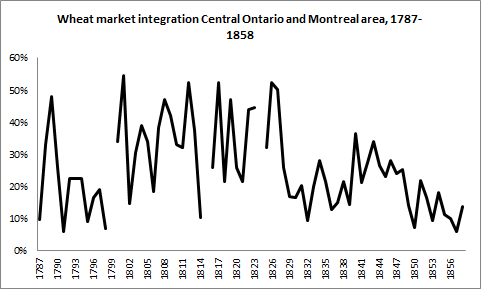