I have been experimenting with new data for a paper I am writing (alongside Vadim Kufenko and Alex Arsenault Morin) regarding mortality and land tenure laws in Canada prior to confederation. Interestingly, I had on my hands a new dataset  (which I had collected over 6 months ago) of prices and wages in Lower Canada (Quebec) for 1831 which offers a broad cross-sectional of grain-wages (what quantity of wheat one could buy with one day’s work). By accident, I stumbled across documents offering deaths and births for the same cross-sectional decomposition. I have been playing around with the data and I have found some very interesting relations.

The most interesting is that, although unsurprising for quantitative historians, mortality was negatively related with wages. The higher the wage rate, the lower the mortality statistic. However, this obvious fact is made fascinating by another fact: grain wages are strongly related with institutions. In Lower Canada, two legal regimes co-existed regarding land tenure. The first was based on French law and was contained to lands settled prior to 1791. The second was based on British law and all new settled lands would be settled under this law. The system based on French law was feudal in nature and landlords had monopoly rights and duties they could charge on peasants who would never own the land plots granted to them. The system based on British was pretty much “homesteading” in the sense that once you had staked out a claim, it was yours (if you managed to get it registered). For the fun of working of data (and before I try to flesh out a more substantive article – I have to finish the ones I am doing with Kufenko and Morin and some others), I just regressed the log of grain wages to the land tenure system with some controls I created for another paper (distance from urban areas, land quality). The result is that we end up with higher wages in areas under laws by 22% and the gap is significant at the 99% level (and the R2 is 14%).

Obviously, more work should be done but if wages were depressed by French law and wages were related to mortality, then French seigneurial law was related to the mortality rate. More to come in a few months! 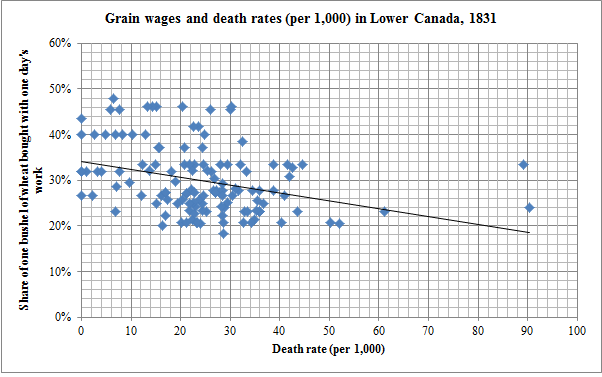