In the research for my piece on the commemoration of the dissolution of the Soviet Union, I fell on a 1998 article by historian Robert Conquest that I had never had the chance to read. In fact, neither in Harvests of Sorrow nor in The Great Terror did I find a mention of what he reports in the article. It makes a novel observation about the Soviet Union and … photography.

The purges of Stalin caused problems for official propaganda. If an individual that was sent to Kolyma died there and happened to be featured on an official picture, how to solve this problem to say that he never existed. Simple, you alter the pictures. In reviewing David King’s The Commissar Vanishes: The Falsification of Photographs and Art in Stalin’s Russia (that I have ordered because of this review), Conquest publishes some of the pictures of this “darkroom manipulation”. Here is one, I think it is quite telling. 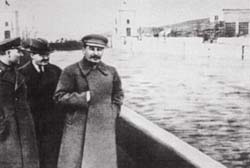 One thought on “Stalin’s darkroom”