As some of you might have glanced, I am also using this blog to hone some of my research by sharing some elements of it with the greater public. It also allows me to reflect appropriately on some issues relating to the economic history of Canada. In that regard, I always felt that little benchmarking of economic performance between the Canadian colonies and the American states (up until Confederation in 1867) which impoverished any analysis of the economic path followed by North American economies (and whether or not America was really “exceptional”).

To answer part of that question, at least during the colonial era (circa 1700 to circa 1760), I decided to recreate a better data set of GDP per capita in New France. There was already a dataset produced by Morris Altman in the William and Mary Quarterly in the late 1980s. However, that dataset used fixed prices of 1749. In short, all measures of production were multiplied by the prices observed in 1749 which assumes that prices did not fluctuate much. As I pointed out in this working paper, prices were very volatile and that assumption undermines the quality of Altman’s pioneering efforts (which were made when computers were … well… dinosaurs). Moreover, most assumption use fixed quantities over time. The most problematic of which was to assume that workers in agriculture were exclusively agricultural – a very dubious hypothesis. Hence, I thought that using estimates of the labour requirements of an acre of land  plowed or pastured (Craig Muldrew estimates this at 18.5 days in late 18th century England) would give me the share of potential labour inputs free for non-agricultural purposes. Afterwars, this share needs simply to be multiplied by nominal wages. Hence, it captures total income better and considers the effects of relative price changes between hinterland goods and urban goods.

Since I collected new data about prices and wages from the Archives of the Séminaire de Québec and the Archives of the Ursulines de Québec, I felt like I could improve on the work of Altman and produce new estimates of GDP per capita in New France. Here are the results. They show that New France had a constant decline in real per capita output from 1706 to 1719 – years of war and inflation (as a result of the colonial administration’s decision to issue money on playing cards). Afterwards, the economy seems to adapt. This seems consistent with real business cycle theory: there was a shock on productivity as a result of war and inflation. Once the war ended and the administration stopped its monetary experiments, growth recovered to the pre-war level. However, it did not increase from 1720 to 1739. 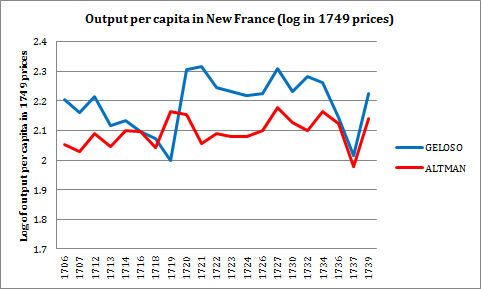 Overall, the time trend shows that New France’s per capita income grew at 0.13% per annum from 1706 to 1739. This pitiful growth rate is dominated by the effects of the recovery after real shocks (war and inflation – 1706 to 1719 and the harvest failure of 1737). Compared to the trend observed in the American colonies, Quebec was a poor performer. Estimates of growth show figures variating between 0.3% and 0.6% per annum (here, here and here and also here) for the period from circa 1700 to circa 1750.

There is another damning piece of evidence for the economic performance in the pre-british era : agricultural productivity. The value of what was produced per acre of worked (cultivated and meadow) land declined constantly. On this basis, the trend is minus  0.49% per annum, most of this productivity decline happened after 1720. In short, farmers in New France only decided to increase their use of inputs which increasing the efficiency per usage. In fact, they sacrified productivity for production. They worked the land industriously to increase their income. As long as land was available, this could sustain a stable standard of living, but eventually, declining marginal returns would have kicked in and the economy would have begun to contract.

So, here is a short summary of what I am trying to say