For those who follow my research on New France and Lower Canada (Quebec before 1867), I recently presented a working paper which discusses the level of agricultural production given alternative form of employment. This was meant to reinforce the literature about the capacity of peasants to respond to market signals and get a better idea of their true level of living standards. I found that where alternative forms of employment to farm activities  (or that could complement farm income) were present, the production of grains was significantly lower than where no such alternative existed. In short, households were smart and they shifted inputs in order to maximize income. The results were statistically significative only for sawmills – which were the main source of non-farm employment. However, these results concerned a fixed point in time – the census of 1831. It was merely the use of a cross-sectional dataset which had rarely been used before.

What about the same logic over time? The problem with Quebec before Confederation is that censuses are rare, of varying quality and of limited scope with regards to data. There are very few continuous dataseries. However, in continuing other research I had the good fortune to find a data source that allows me to compute a reliable estimate of production of a large number of parishes in the late 1780s and early 1790s (see source below).  This gives me the amazing possibility of combining this dataset with the datasets regarding prices throughout the years of British rule in Quebec and the sample I collected from the 1831 census. Results? I can regress productivity growth in grains harvested per person (measured in shillings held constant to 1860) over the number of sawmills from the late 18th century to 1831.

First of all, the rate of productivity growth is impressive and allows me to confirm my dismissal of the claim that Quebec’s economy was living through a crisis in the early decades of the 19th century. The compounded annual rate of growth between those years and 1831 stands at 0.4% per annum (which is slightly lower than estimates about agricultural productivity in New England) and confirms my earlier estimates of productivity growth in the Trois-Rivières area at 0.31% per annum. In fact, estimates of growth measured in calories that I tended to use in the past was a conservative one – 0.27% for the entire colony between 1788-1790 and 1831 and 0.1% in the Trois-Rivières area between 1762 and 1831. Clearly, Lower Canada was hardly living through an agricultural crisis.

Secondly, the rate of productivity growth was negatively affected by the number of sawmills found in a given parish in 1831. Regression analysis yields the following results. They are not perfect, but one additional sawmills per 1,000 inhabitants in 1831 meant that productivity growth between 1788-90 and 1831 was 0.119 percentage slower than it would otherwise have been. The sample of 84 parishes represents some 60% of the colonial population, more than sufficient to induce the broad reliability of the results.

Peasants in Quebec were not as dumb as people claim them to be. If I am critical of the thesis of no growth or negative growth, I admit that growth must have been slower than in the United States (maybe as fast as that of the Southern States) or than in Britain. However, that poor rate of growth was not the result of poor household decisions by peasants and that rate is greatly underestimated by the lack of consideration given to the ability of peasant households to shift inputs. 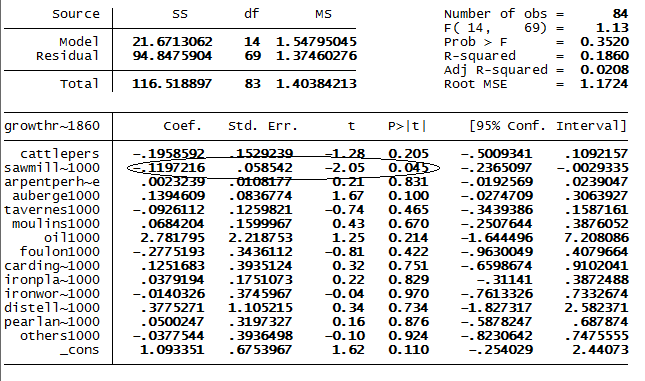