During the work on my thesis, I managed to compute the number of ships lost and seized at sea as a percentage of total ships headed from France to Quebec. I used the work of John F. Bosher who compiled the list of ships lost, seized or sunk at sea which were headed to Quebec. I then plotted these relative to the number of ships that entered the Quebec harbor which is available in James Pritchard’s 1976 article in the Revue d’histoire française d’Outre-mer. It is quite interesting to see how high the rate jumps in times of war and how high it remains overall in years of peace. 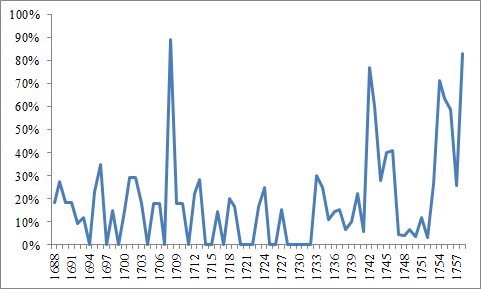