In line with my previous posts on the growth of living standards in Quebec prior to the Act of Union of 1840, I have used statistics provided by Gregory Clark (Agricultural Prices in England since 1209) to derive an estimate of the value of timber exported from Quebec to England. Why such an estimation? Because it acts as a proxy for another field of interest to me: agricultural productivity.

As I have stated earlier, the conquest of Quebec likely included the colony within a safer network of international trade where economies of scale and increasing productivity allowed the colony to benefit from “smithian” growth (larger markets give more scope for specialization). If the existing literature is correct in labelling Quebec farmers as “traditionalists”(also labelled as “peasant mentality in reference to the inability to act in what economists would dub “rational behaviour) we should see that their inability to produce food more efficiently would make the cost of living dearer to workers who decide to seek employment outside the agricultural area. The “counterfactual logic” is that if farmers were inefficient, workers leaving agriculture would reduce the food supply and, without a drop in demand, increase the cost of living. This means higher prices to agricultural produces which would drive them back into the fold. If farmers are able to increase production and productivity, then workers will gradually be reallocated to more productive uses in other sectors of the economy (manufacturing, services, shipping etc.).

Yet, as we can see, the value of timber exported from Quebec (with the exception of the peak of the Napoleonic wars) rises steadily on an inflation/population adjusted basis. This suggests that there must have been some level of agricultural productivity growth because the workers involved in cutting, transporting, loading and shipping timber to England and elsewhere would have faced increasing food prices which would have offset the benefits of exiting agriculture.   As a result, the timber industry should have contracted, not expanded. 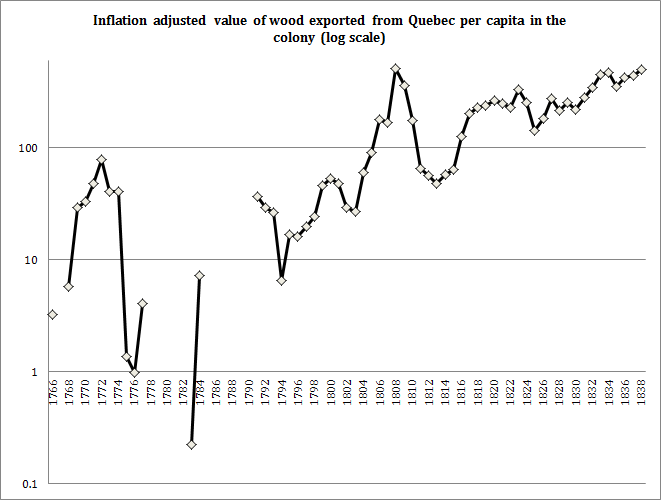 My point here is not new to economists and economic historians, it is new however for Quebec historians who have long been debatting (and who are still debating) whether or not (or the degree at which) Quebec farmers were “retarded” (I say this bluntly, because the debate is exactly that: were farmers unable to be rational and adopt welfare-optimizing behaviour?).

I argue that if these farmers were retarded and unable to increase productivity in a sustainable manner, other sectors of the economy could not have developped.

Here I may offer a proposition which I am still surveying in my own work: like the United States, Quebec did experience economic growth up to 1820 that was mostly the result of expanding markets (due both to increased shipping productivity and the oceanic domination (and security provided) of the Royal Navy). However, after 1820, institutional factors would be the main explanatory force in the divergence which began at that time between Lower Canada and Upper Canada and to a greater degree between Lower Canada and the United States.